Former Vice President Joe Biden is projected to secure the 270 electoral votes needed to make 1600 Pennsylvania Avenue his home for the next four years. With a new administration comes new policies, which may cause investors to make changes to their portfolio based on the perceived implications.

Perhaps one of the biggest questions on investors' minds is the impact of Biden's proposed tax plan - some of the key features include¹:

To pass a tax increase, both the House of Representatives and the Senate need to pass a bill –a divided Congress could constrain this. If changes do happen, they aren’t immediate, and it is impossible to predict their end-effect. For example, Presidents Ronald Reagan and George W. Bush implemented tax cuts during their administrations. If you had invested $100 in the S&P 500 at the start of each of their administrations, it would have grown to $324 under Reagan and declined to $70 under Bush². In 2013, the Bush tax cuts expired for those making more than $400,000, in effect, this was a tax increase on income above that range. The S&P 500 increased in 2013, 2014, 2015, and 2016; highlighting that the tax increases did not cause a market collapse, a worry that many investors have during times when we experience tax hikes. Investors should be careful to extrapolate the impact of tax policy on their portfolios.

Often when a new administration comes into office there are plenty of opinions and prognostications around which sectors will perform best, leading some to make tactical changes. President Trump’s most recent 4-year term serves as an example of the difficulties of making sector forecasts based on who is in the Oval Office. Energy and financial stocks were viewed as the best bets under a deregulatory Trump administration, yet they’ve been the worst sectors since 2016.³

Lastly, investors should remember that while US presidents may have an impact on market returns, so do hundreds, if not thousands, of other factors—the actions of foreign leaders, a global pandemic, interest rate changes, rising and falling oil prices, and technological advances, just to name a few. The combined impact of millions of investors placing billions of dollars’ worth of trades each day based on the perceived impact of these factors results in market prices that incorporate the collective expectations of those investors. This makes consistently outguessing market prices very difficult.

While it may feel natural to draw a connection between the administration in power and the impact they may have on markets, shareholders are investing in companies, not a political party. Companies focus on serving their customers, helping their businesses grow, and generating profits, regardless of who is in the White House. The chart below shows the annualized returns during different presidential terms going back to 1969 – red bars denote time periods when a Republic President was in office and blue represents a Democratic President. The exhibit illustrates that there is no evidence to suggest that having a Republican or Democrat in office is better or worse for markets.

Making investment decisions based on the outcome of elections, or how investors think policy changes may unfold, is unlikely to result in reliable excess returns. On the contrary, it may lead to costly mistakes. Accordingly, there is a strong case for investors to rely on a consistent approach to asset allocation—making a long-term plan and sticking to it. 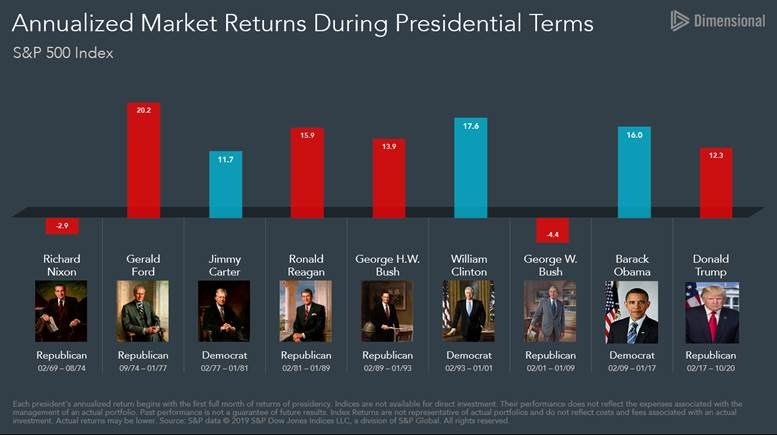